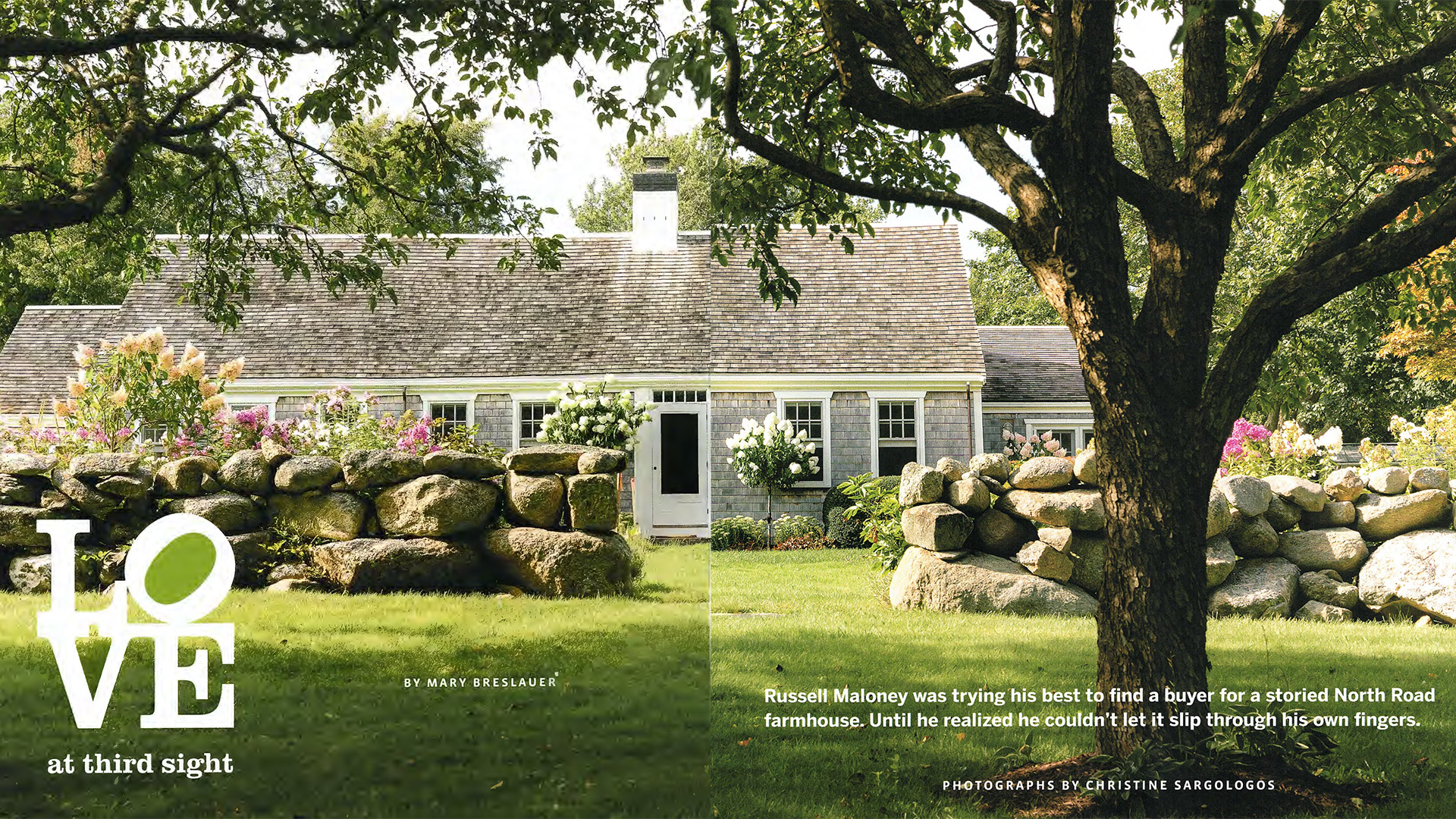 From the outside and peering through the hedgerow, the early 1800s Cape with its rolling lawns, perennial gardens, apple orchard, real estate office, barn, and outbuildings appears to be simply a well maintained older and stately property that harkens back to quieter days. The seven-acre property, situated on North Road in Chilmark, across the street from North Tabor Farm, was once the home of actor James Cagney's cattle rancher. The barn was used as a home for cows and pigs. Cagney created a gentleman's farm, and his family came each summer for fifty years beginning in the mid-193os. In its heyday, the Cagney property stretched from North Road to the North Shore. In 1957 he split off seven road-facing acres and its buildings and sold it to the von Mehren family. The von Mehrens made some improvements over the years, including adding a pool and tennis court, but in 2015 they put it on the market, which is when it caught the eye of Russell Maloney. "I immediately called Debbie Hancock, who was the listing agent, and told her I had to see it," says Maloney. There was one complication. Maloney is himself a real estate agent; a client of his from California also admired the property and came back several times to ponder an offer. But each time Maloney escorted the family around the land and buildings, he became more attached to the property and its possibilities. "Finally, I called him and said, 'Look, if you're not going to make an offer, we are,"' recalls Maloney. Maloney and his husband Jay Schmidt - the pair have been together for thirty-one years - bought it with the intention to restore and modernize, not tear down, what for many is one of Chilmark's prime residential landmarks. The work started in the fall of 2016, and the first phase was completed by May of 2017.Much of what was initially done fell under the "must do" category. There was a heating system, for example, but very little insulation in the main house. 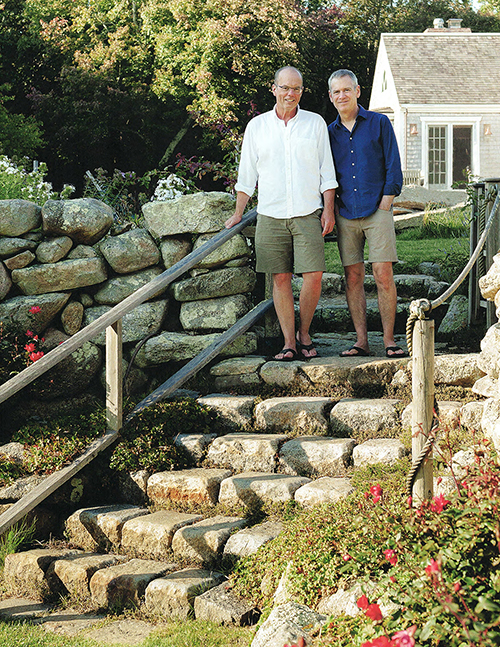 The doors and windows were single pane and drafty. That first winter, says Maloney, "we felt like we were heating all of Chilmark." This was by no means their first rodeo. When Maloney, sixty-three, and Schmidt, fifty-nine, were both cranking out a living in New York City, they renovated two Connecticut houses. Life dramatically changed after Maloney was diagnosed with non-Hodgkin's lymphoma in 2000. "I was basically told I was lucky if I had another seven years to live," Maloney recalls. After undergoing debilitating treatment and recovering, Maloney "literally woke up one morning and said, 'You know what? I have to go somewhere that I love.' And I love it here, so we decided to move to the Vineyard." The couple rented in 2004, then bought "the cheapest house in Chilmark" and redid the place top to bottom, including showing the rats the door. For the first year, Maloney did not work, but after receiving a welcome if unexpected medical call that he was cancer free, he decided it was time to find a job. "The turning point that day on the beach was it was good news that he was in good shape healthwise, but the bad news was he was going to have to work again," remembers Schmidt. 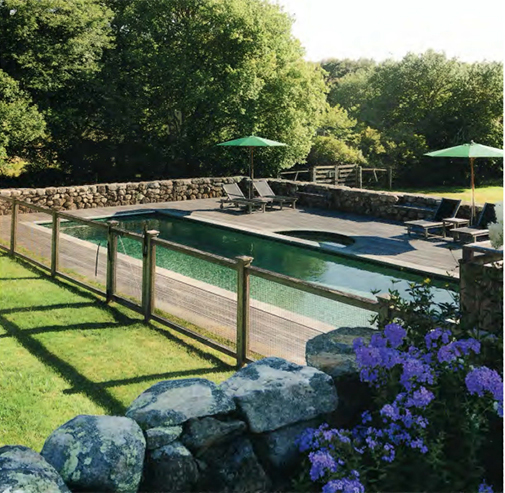 There was a newspaper ad for an office manager at Flanders Up-Island Real Estate in Chilmark and it was a game changer. The Flanders clan became like family. Maloney learned the business and in 2008 launched his own firm. Today, Maloney's office is a whitewashed three room building on pilings that sits adjacent to the main house. Once a chicken coop and long a cheap rental that served many Islanders as an anchor in their younger days, it's been updated and, thanks to rats once again, the floor fully insulated with steel mesh. There's a comfortable couch and chairs for clients in the main room, and in Maloney's work space a small wooden desk, two mid-century chairs, and a small TV tuned to the stock market, harkening back to his previous career in finance. A collection of Post-it Notes by the door displays a work life that's less deskbound: "Back @3 R"; "Down by the pool"; "Back@ Noon R". It's hard to say what part of the property is thecreme de la creme. It's impossible to imagine any piece of it missing. A man-made pond off the back of the house now has an aerator, creating a fountain of water that brought back the fish and turtles that were being suffocated by weeds. The somewhat worn but functioning tennis court at the back of the property almost makes one imagine the legendary Althea Gibson showing up with her wood racquet looking for a game. Slightly defensive about the state of their own play, the couple have found a tennis pro who assured them, "old farts are my specialty." 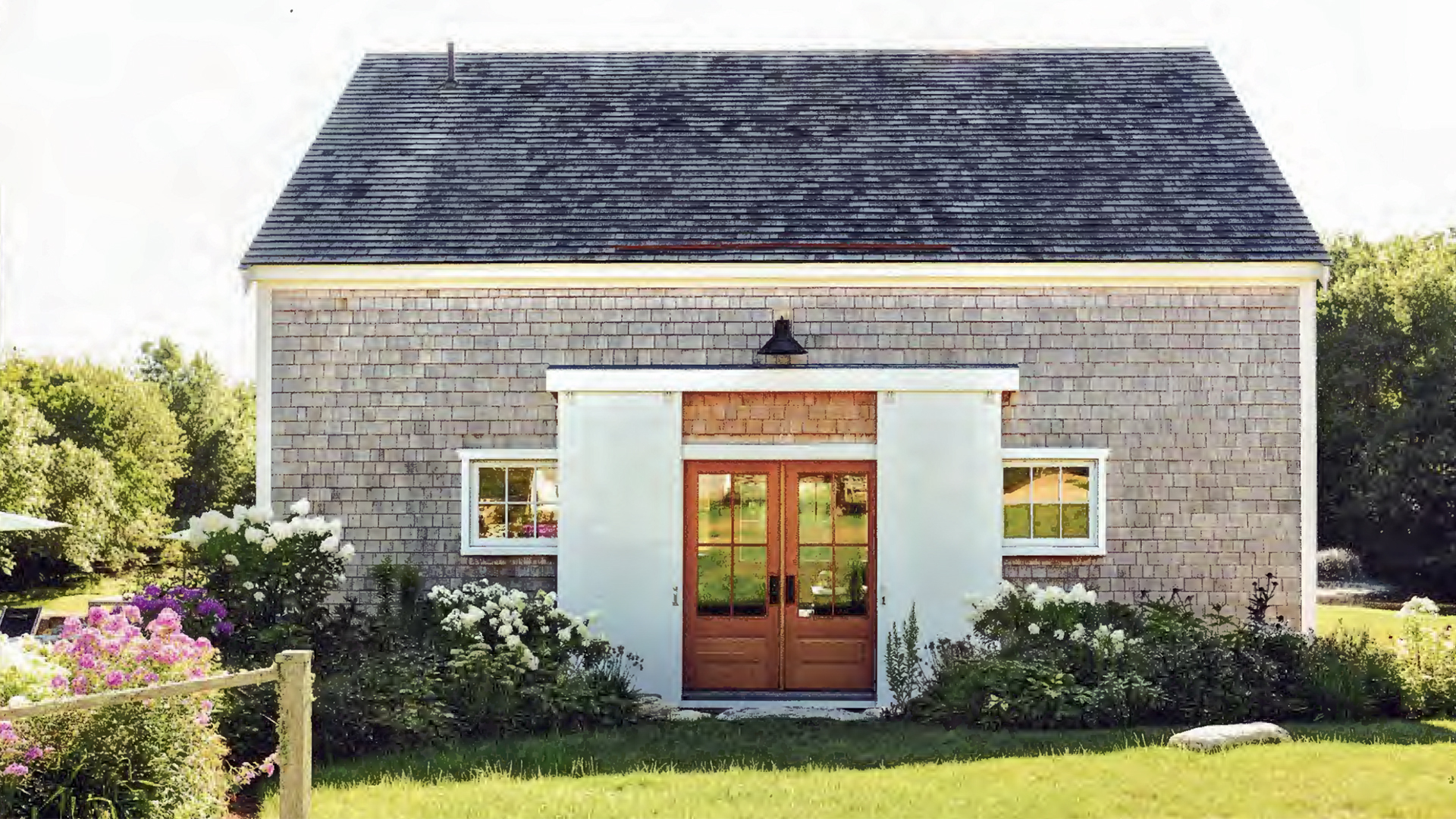 Above: The new barn replicates the old one with an identical footprint and sliding white barn doors.

The apple orchard and perennial gardens that surround the house, driveway, and pool have been meticulously restored and tended; the stone walls now stand strong and welcoming, whether leading to the pool, the orchard, or the new barn reimagined. The original barn, deemed too damaged to repair and restore, was torn down and replaced by a Douglas fir timber-pegged post-and-beam structure that was completed this past January. The footprint is identical, as are the sliding white barn doors, so that its appearance from the road or when entering the property is unchanged save for the new shingles and roof. But open the barn doors and hidden wooden glass doors reveal a modem, open, and elegant 1,100-square-foot house. (With seven acres, the couple was permitted a second house on the property.) The air-conditioned space was a welcome escape for the couple during the hot, humid weeks of the past summer. The main house still lacks that amenity. The barn's open floor plan includes a cook's kitchen with a six-burner Bertazzoni stove, deep gray cabinets, and a butcher block countertop. The sunken living room opens to the yard, gardens, and out the side door to the pool. The open staircase has blocky wood treads and handrails with copper pipe balusters straight from lumbers' Supply Co. in Vineyard Haven. The open bedroom includes built-ins, and the hallway, which feels suspended over the space below, features more Douglas fir handrails and copper pipes that serve as railings on both sides. The hallway connects to the main bathroom where the first impression is quite Nordic, right down to the six-foot white cast-iron soaking tub.- 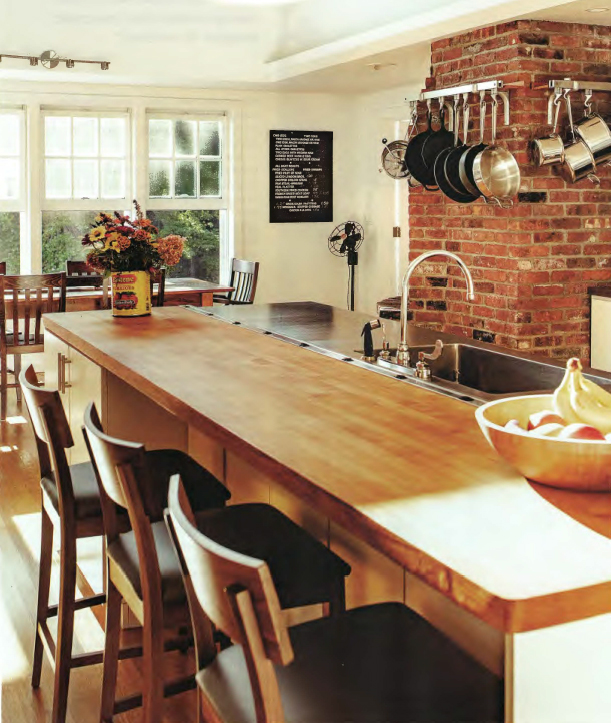 Above: The kitchen inside the main house.

The couple is still debating whether or not to add a mirror over the sink or a backsplash to protect the clapboard cedar walls that surround the house interior from splashing water. For the moment, says Maloney, "we're being very careful."Of course, the main event is the house itself. As Schmi dt says, "A lot of what we did was repair and restore. The house was in nice enough shape that you could imagine it restored. It just looked old and fussy." For example, off the kitchen was a sunroom that, says Malo ney, "looked like Bea Arthur was going to walk in at any minute." Because the von Mehrens had installed custom metal architectural windows that can't be screened, the couple added a narrow screened-in porch that runs the len gth of what is now one of two master bedrooms on the first floor. "Now it's like we're sleeping outdoors," says Schmidt. The kitchen is large, open, and sunny with a working beehive fireplace that, once an exhaust fan was installed, could be counted on to warm the room or cook burgers . What stands out is the artwork, all kitchen inspired. Above the island is a large painting of a guest check by Island artist Chioke Morais. The couple believes it might even be a copy of a typical check from the former Detente restaurant, once a favorite Beetlebung Comer hangout where the artist was a waiter.The living room, off the main entrance, is like the rest of the house: pristine white, with bookcases, a fireplace, a baby grand piano, and collectible paintings by the late American artist Elizabeth Sparhawk -Jones that are believed to have been completed on the Vineyard. The paintings were discovered in a barn on the first property Maloney sold as a broker, and he knew immediately he wanted the best of the lot. As Schmidt says, the paintings take a more modern approach than her earlier work, attributed perhaps to the fact that they were done sometime in the fifties, toward the end of her life and after her release from a medical institution. The dining room, which intersects the living room and leads to the large kitchen, is taken up entirely and simply by the table and chairs. 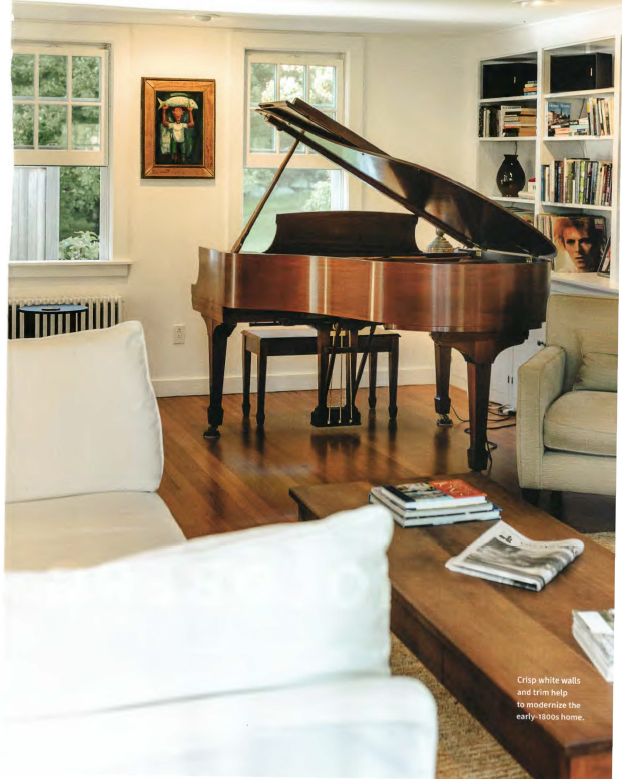 Above: Crisp white walls and trim help to modernize the early-1800s home.

A stunning slab of Picasso marble from Italy sits on a former retail display table the pair purchased off the floor for $100. In fact, many of the pieces throughout the house come from their years in Connecticut collecting antiques and salvaging industrial pieces. Like many older Capes that have been added on to throughout the years, the downstairs seems to wind around, with one room spilling into another. To the right of the front hallway, there's a laundry room and a side room now taken up with a treadmill and rowing machine. Keep walking and one finds a former potting room with a heated tile floor and a big sink for cutting and cleaning. What's unexpected is the second master bedroom just beyond. The four-poster cherry bed and dresser overlook the side yard and gardens. The master bath is, well, a bit of a mystery and a bit of a joke. It is entirely stainless steel and glass, from the tiles that line the walls and surroundthe tub to the walk-in shower and side toilet, each sealed off by glass doors. It's on the list for a re-do. It's not until you climb the narrow stairs that the elements of the original house come into full view. The three bedrooms and a single bath reveal the interior brick chimney and the rough-cut exposed beams.Today, Maloney spends most days tending to business and the refreshed, reimagined property while Schmidt commutes to his job as division president of brand portfolio for Caleres in New York City, which used to be Buster Brown Shoes. "It's a pain. We wish it were easier," says Maloney, "but we certainly recognize because it's so difficult to get here, this Island has stayed pretty much the way everyone wants it to stay."Adds Schmidt : "We were just with someone who said, thirty years ago North Road didn't really look all that different. Where else does that really happen?" Thanks to this couple, who took care and thought to restore rather than tear down, the old Cagney and von Mehren place has found a new heyday.